I’m going to try and avoid using a lot of the clichés about running a marathon but since the beginning of 2016 I have dedicated a lot of my spare time to training for my first ever marathon.

Having played sports and been active most of my life, most recently just visiting the gym a few nights after work and not having a goal as such.  So I started running at my local parkrun (you may have heard about parkrun a lot in the news this week!) and signed up to a few ‘races’ ranging from 5k to 10 miles.  I wasn’t running to win as such but wanted to test myself against club runners and see how I got on, while gradually building my cardiovascular fitness levels.

In May 2015, I took the plunge and joined a running club – Norwich Road Runners to be exact.  The club welcomes new people with open arms and meeting people who had run so many different races really inspired me.  So later in 2015, I can’t remember exactly when, I signed up to run my first marathon on April 10th 2016, in Manchester.

I won’t lie, I chose Manchester because I was told that it is the “flattest and fastest” marathon in the UK – 26.2 miles of flat roads, well it’s better than 26.2 miles up and down hills isn’t it?!

My training began in January 2016 and since then I have run over 340 miles in training for the marathon.  My longest training run was 20 miles, which was also a ‘race’ so it felt like good prep for the big day.  In the main my training went reasonably well, I didn’t pick up any injuries but I did have some plans that I couldn’t change which meant my runs had to take a back seat and if I was to do it all again I would do some things slightly differently.

On Saturday 9th me and my friend Adam (who helped support me so much by driving me from Norwich to Manchester and back) travelled up to Manchester, with a stop on the way to take in a football game.  We arrived in Manchester at around 8.30pm and as I wasn’t feeling myself I pretty much went straight to bed.  I wasn’t sure if it was nerves or a touch of flu, but either way I opted to sleep it out.

The next morning my 6am alarm woke us both up and it was Marathon day.  The conditions were pretty much perfect so I forced some food down and we set off to the start line.  I met my friend Michael from Norwich Road Runners and seeing him helped ease my nerves.  We took in the atmosphere and had a couple of pictures on the start line and met a few others.  I have run a lot of miles with Michael and we were both hoping for a similar time, so we set off together and kept a steady pace. 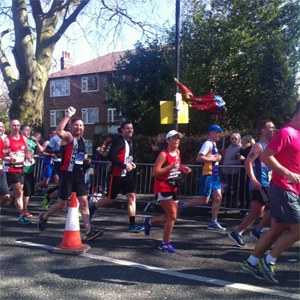 Up to half way we were right where we wanted to be, both felt good and enjoying the run, it wasn’t until 16 or 17 miles in when I started to tire a bit, so I did what all runners do and told him to go and run his race and get his time.  I battled on and although I had to walk some bits, I finished in 4 hours and 25 minutes.  I won’t lie, parts of the run were very hard and much more difficult than I had ever expected, it was certainly a rollercoaster (ok one cliché)!

Reflecting on it all, I was disheartened not to be nearer to 4 hours, but I’m proud I completed it and will certainly learn from it.  It was a great experience and I want to say thanks to everyone who helped and supported me, every message helped and I tried to reply to each and every one.  Who knows what the future holds, I’d like to one day run the London Marathon, but now I know how hard it is it won’t be something I take lightly.  Big respect to everyone I know who has run marathons, you’re all amazing!

« Testing, Testing || What does your brand mean to your customers? »